Our special Biography Collection at Kensington Central Library is home to many different kinds of biographical book, and that includes a large number of diaries.  These provide a very special kind of insight into a people’s lives.

Some diaries have become vital parts of the world’s heritage and have been read by millions, like those of Anne Frank and Samuel Pepys.  Some are the private jottings of ordinary people, whose experience of key moments in history have made them invaluable witnesses.  Others, kept by the famous, may have been written with at least one eye on posterity, or may have been intended to be private, and now afford a glimpse behind the public mask.

Diaries can mix records of hugely significant events and musings on enormous philosophical questions with the minutiae of everyday life – so the Pre-Rapahelite artists documented by William Michael Rossetti debate the meaning of art one minute and complain about faulty stovepipes, sore throats and toothache the next (many diaries reveal the chronic discomfort of life in earlier periods), and George Bernard Shaw meticulously records the prices of the train tickets, newspapers and ginger beer he purchased on the way to lecture engagements at which he speculated about the future of humanity.

This year’s Cityread London showcased the fictional London diary of a young Muslim woman in Sofia Khan is not Obliged by Ayisha Malik.  We wanted to plan an event to link our Biography Collection to this, and were also mindful of the fact that it was the bicentenary of Queen Victoria’s birth, down the road at Kensington Palace, on 24 May.  The idea of having a look at some of the diaries in our collection that were kept by diverse London residents and visitors during Victoria’s reign gave me a great opportunity to dip into some wonderful examples of one of my favourite kinds of biography, eventually selecting thirteen different voices to try to give some snapshots of London life between 1837 and 1901.

Given that most diaries in this period – and certainly most of those published – were kept by the well-to-do, it was a challenge to find the voices of those in more humble circumstances, but the diary of Hannah Cullwick gives a unique insight into the life of a domestic servant, and the struggles of the destitute were shockingly recorded by minister’s daughter Helen G. McKenny as she made philanthropic visits in the Old Street area. 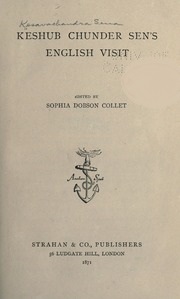 I was fascinated to read about Keshub Chandra Sen’s visit to London to promote links between British and Indian social reformers, and to discover that Leo Tolstoy’s visit to a school in Chelsea as part of research into setting up schools for the peasant children on his Russian estate, left a legacy of 24 individual school boys’ accounts of a single day in 1861, on which they studied, played, fought, had boating accidents and acted as fences for stolen goods, amongst other things.

Local Kensington detail gave Marion Sambourne’s diaries an especial charm, and the fact that Malik’s Cityread book continues the genre of the humorous fictional diary which has given us Adrian Mole and Bridget Jones, allowed me to look at a Victorian fictional diary – Happy Thoughts by F. C. Burnand – which graced the pages of Punch 20 years before its more famous successor The Diary of a Nobody, (which Burnand edited), and which is still laugh-out-loud funny over 140 years later.  Of course, Queen Victoria herself was a prolific diarist, and extracts from her own writings revealed a remarkable juxtaposition of the stately and the intimately domestic. 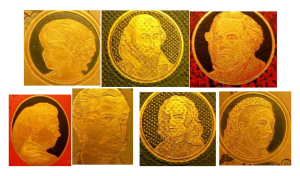 The bulk of our Biography Collection dates from the nineteenth and twentieth centuries (although of course it comes right up to date with some very recent publications, and our oldest book dates from the early seventeenth century), so this was also a good opportunity to look at some of the physical aspects of our Victorian books.  The late Victorians loved the glamorous glitz of gilding on their bindings, and many biographies of this period sport beautifully detailed medallion portraits of their subjects. 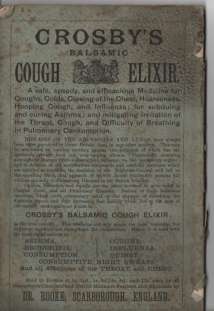 It’s always very evocative to look at the handwritten inscriptions, personal bookplates, school prize labels and typically ornate library stamps of this period – in the spine of one book I found part of a Victorian newspaper advert, and the wonders of the Internet allowed me to reconstruct the full text.

This unique collection contains a treasure trove of insights and knowledge, not only in the content of the books, but also in their physical fabric, which gives a fascinating sense of the Victorians who wrote, published, bound, decorated, inscribed, catalogued and kept them, preserving them in private and public libraries until they found their way to our collection, where we can enjoy them today. 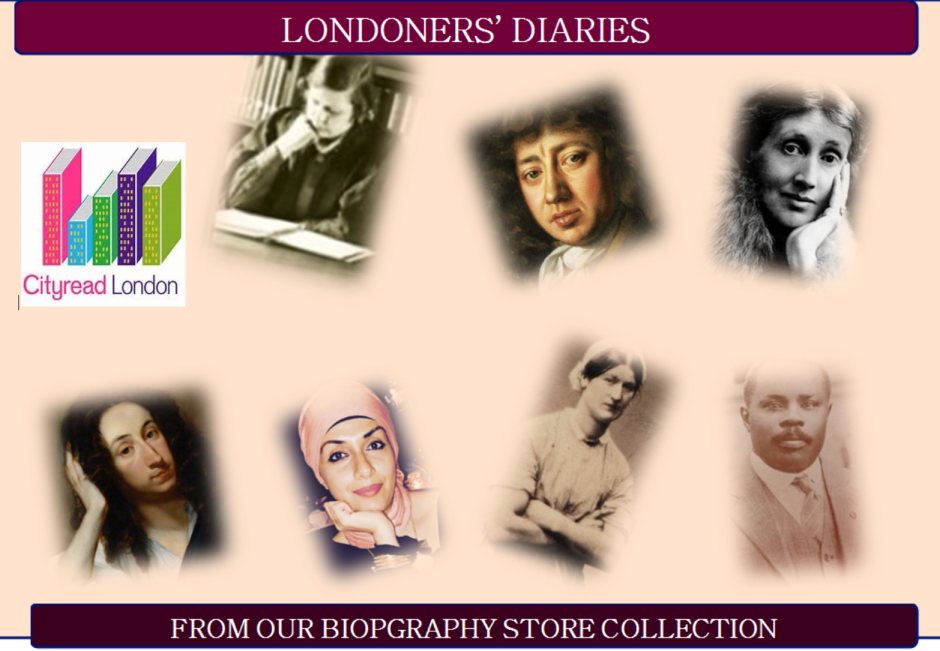 Throughout the month of May we will have two displays of books from our special  Biography Collection. 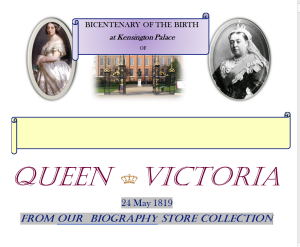 To mark the bicentenary of Queen Victoria’s birth, just up the road at Kensington Palace, on May 24th 1819, we have a range of the many biographies of her in our collection. We have coffee table books beautifully illustrated with portraits, and detailed analyses of her relationship to the huge changes that took place during her reign – politically, socially, industrially and culturally.

Every aspect of her unique life has been documented by a biographer at one time or another, making use of the incredible resource of her copious diaries, so you can read about her role as a mother, her celebrated love affair with her husband Prince Albert, her childhood, her sense of humour, her leisure pursuits, her health, and her relationships with the politicians and statesmen of her day, as well as with her royal relations all over Europe.

Her six and a half decades on the throne spanned the transition from one world to another, and her qualities as an intelligent and curious woman make her a fascinating observer of her own life and times. 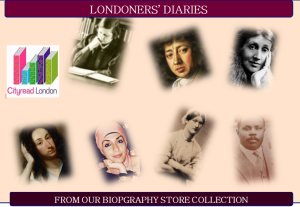 Our second display is on “Londoners’ Diaries”, and is linked to Cityread London, whose choice this year is Sofia Khan is not Obliged by Ayisha Malik, the funny and touching fictional diary of a young woman negotiating the Muslim dating scene in present day London.

There is something uniquely intimate and vivid about reading the private thoughts a diarist put on paper perhaps centuries ago, and we invite you to share the excitement of travelling back to the London of earlier eras through their observations. We’ve included some of the greatest diaries ever written, like those of Samuel Pepys and Virginia Woolf, as well as the diaries of less famous Londoners like the nineteenth century schoolboy John Pocock, and contemporary diaries whose writers celebrate different aspects of life in the capital – dog walking with Edward Stourton, ambling and observing with Tim Bradford.

We can learn how Londoners experienced huge historical moments through the immediacy of daily records, like Joan Wyndham hilariously juggling her love life during the Blitz, or Kate Parry Frye, a young Kensington woman pursuing her cause as a tenacious and passionate suffragrist. Come and meet your fellow Londoners of ages past – you never know, it might even inspire you to start keeping a diary of your own!