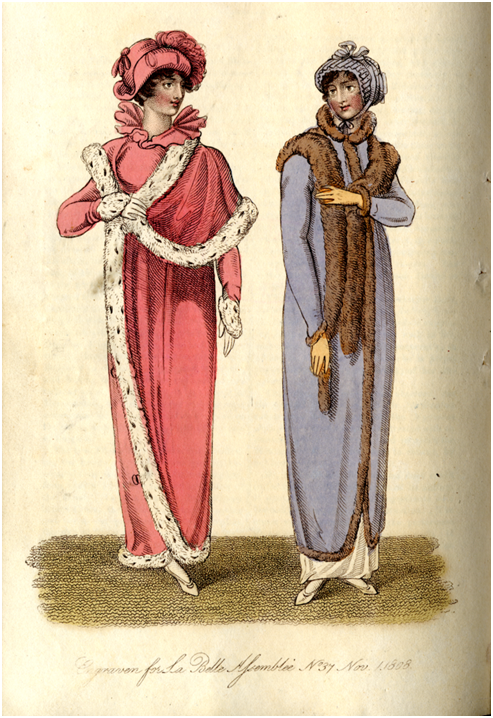 Chelsea Reference Library had a bit of space on the wall above our costume collection, and what better way to fill it than with some beautiful images from our fashion and costume periodicals?

Staff at the library were asked to pick their favourite images from a shortlist, and choosing was tricky! The images, depicting costume spanning the Regency and Victorian eras, were all picked from our own magazine archives of La Belle Assemblee, The English Woman’s Domestic Magazine and Les Modes Parisiennes. We like the fact that the winners show how the shapes and styles of fashionable dress changed over 5 decades:

Classical Greece influenced dress was at the height of fashion in 1808, featuring a high empire waist line and long straight skirts. Woman dampened the muslin draperies so that they clung to their figure!

This evening dress from 1812 features a great turban – indoor caps for daywear weren’t that fashionable in this era but essential for evening wear and turbans were a very popular choice.

By 1928 a very different silhouette was in fashion –with so called leg-o’-mutton sleeves and skirts with tiny waists and wide bases. Check out the elaborate trimmings and hats!

By the 1850’s ladies skirts were so domed that they had to be supported by hoped cages called crinolines and lots of petticoats.

And then by the 1870’s the fashion was to have a flat front of the skirt, with lots of fabric pushed to the back… called a bustle. This image features a popular style called the Dolly Varden (Charles Dickens fans will get the reference) – where you have an overskirt which is shorter at the front with the sides and back bunched up.

Here are a few other images that were on the shortlist but didn’t make the final cut. We hope you like our choices!

The colours of these prints are really vibrant even after all these years, but we also loved seeing some amazing pictures of the actual fabrics in one of the books that we have in our collection – Nineteenth-Century Fashion in Detail by Lucy Johnston published by Victoria & Albert Museum:

To find out a bit about costume in this era we also read History of Women’s Costume by Marion Sichel. Come along to Chelsea Library to find lots more about the world of Costume and Fashion, or log on to Berg Online with your library card!