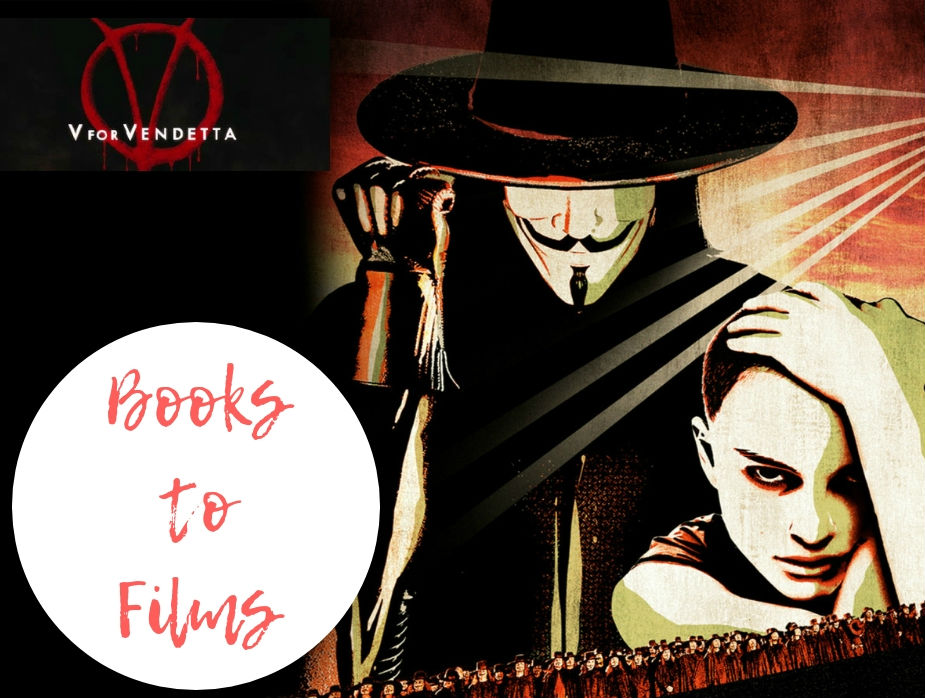 This month we have another book to film review.  David from Brompton Library gives us his views on the dystopian, political thriller V for Vendetta 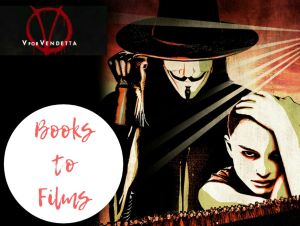 This is a classic fantasy-political thriller in graphic novel form, written by the titan of comic writing, Alan Moore, with drawings by David Lloyd. Written in 1983, the book is set in the then near-future of 1997. A dystopian Britain emerges after a nuclear war, but where Britain is spared (the hypothetical Labour Government of 1983, got rid of American Nuclear missiles).

As the world around them is collapsing, society begins to fall apart, and out of the power vacuum fascism takes over with the promise of security and order- but as you can imagine, the new authoritarian society isn’t for everyone. Hence, the book’s anarchist protagonist, ‘V’- a unique and nuanced (anti) ‘hero’ character, comes into the classic narrative of the underdog fighting for justice and truth, and isn’t afraid to use violent means to obtain it. V symbolically wears a Guy Fawkes mask (“the only person to enter parliament with honest intentions”) and wig while on operations- and there he rescues Eve, the other main character, a naïve young girl who suddenly finds herself on the wrong side of the law.

The book really captures the feeling of foreboding political despair of nineteen eighties politics, of the Cold War, and of authoritarian conservatism tightening its grip on society. Another character- a police detective, is hired by the government to stop V and his misdemeanours, but while doing so starts to question the morality of the government he has sworn to serve. What makes the book so captivating, is that it has an entertaining narrative but within a thought-provoking context. The drawing is great of course, although I didn’t like all of it and some of the colour choices were awkward. Nevertheless, this is a great introduction to more sophisticated graphic novel fiction.

It’s not often that films match up to the books they are based on, but the movie does a pretty good job in my opinion. It’s unfair to say which is better as they are quite different in style- the film is set in the near future from when it was made; in 2006. Of course, then as it is now, the major threats to the world had changed, and the film absorbs them. In this changed narrative, the United States has fallen apart into chaos and civil war after stretching its empire too thin (of course, 2006 was when the Iraq War was still ongoing), and in Britain and Europe, jihadist militants are alleged to have committed a mass atrocity by poisoning the water supply, leading to the landslide election of a fascist party in Britain and the end of parliamentary democracy.

Other than the context, the main story doesn’t differ too wildly to the book, although there is more play on V’s fighting skills and swashbuckling action, which is done well and obviously adds to the entertainment value and mainstream appeal. There are also a few characters and side stories that have been cut out, probably for practical reasons- but the film doesn’t suffer too much as a result. In a political sense, V’s character has been a little watered-down for Hollywood, with liberalism replacing anarchism as V’s portrayed ideology.

Author Alan Moore, who rejects all film adaptations of his books, said of the script: “there wasn’t a mention of anarchy as far as I could see. The fascism had been completely defanged. I mean, I think that any references to racial purity had been excised, whereas actually, fascists are quite big on racial purity.” The only actual blatant reference to ‘anarchy’ in the film is when V manipulates chaos into the general population in order to overthrow the regime- a man robs a shop wearing the (now ubiquitous) Guy Fawkes mask, shooting his gun into the air, and referencing the Sex Pistols, shouts: “Anarchy, in the UK!”. So it seems the wider political themes were indeed a little ‘dumbed down’.

I enjoyed the film but that bit did make me cringe, because as explained by a politically informative line in the book, V states: “Anarchy means ‘without rulers’; not ‘without order’- with anarchy comes an age of ordung, of true order, which is to say voluntary order… this is not anarchy eve… this is chaos”.