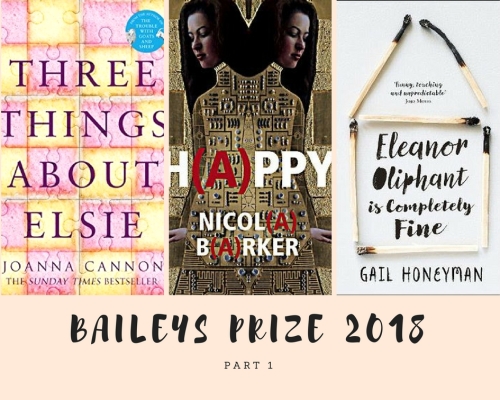 Now well into its second decade, the Women’s Prize for Fiction is firmly established, is respected throughout the world and has made a major impact on the literary landscape in the UK and beyond.  Here are some reviews of books that have been longlisted this year –

Despite its sad subject matter, this was an entertaining and sometimes hilarious read.  Eleanor is a perfect character: you laugh with her, you despair at her and you route for her the whole way.

Florence is eighty-six and living in Cherry Tree Home for the Elderly. She is trying to behave herself and not forget so many things, helped all the time by her best friend Elsie. We learn two important things about Elsie quickly but it’s the third thing about her that makes this novel exceptional.

You can tell Joanna Cannon has a background in psychiatry as we really get to see inside the minds of the characters and she has some great insights on human nature.

Mina A is H(a)ppy. Her and the rest of The Young live in a world without pain, want, fear or death. They all strive to remain in balance and avoid an excess of emotion. But when Mina A starts writing her own narrative, she struggles to maintain her feelings.

This was unlike anything I’d ever read before. The story argues with itself, desperately trying not to be told. It has a unique and unpredictable layout, where every page is a surprise.

The shortlist is due to be announced tomorrow, Monday 23 April.