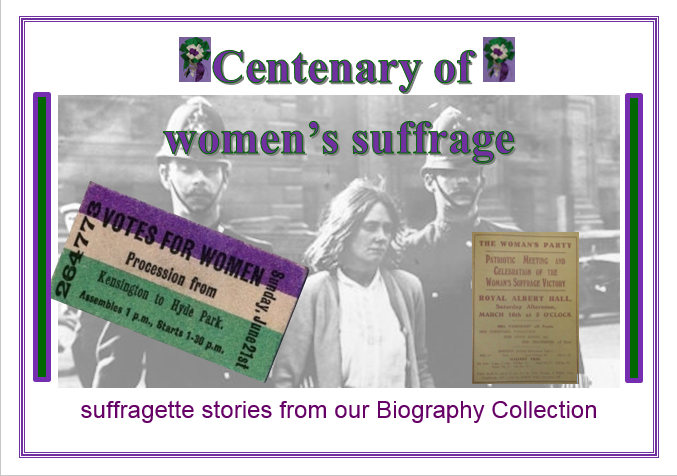 This month’s display of books at Kensington Central Library from our Biography Collection is to mark that 100 years ago today women got the vote for the first time.

On 6 February 1918, royal assent was given to the Representation of the People Act, and for the first time over 8 million British women were entitled to vote. The original legislation enfranchised only those women who were over 30 and owned property above a certain value, or who were university graduates still living in the constituency of their university. (It took another decade for women’s eligibility to vote to be based on the same terms as men’s.) It was widely considered to be a recognition of women’s role in the First World War (as almost thirty years later, their role in the Second led to women being given the vote in France), but the change in the law was also preceded by several years of increasingly militant protest and agitation by women determined to end their exclusion from the democratic process.

This month, we mark the centenary of this momentous legislation with a special display of suffragette and suffragist biographies from our special Biography Collection in Kensington Central Library. From the most famous names of the movement, like the Pankhursts, to working class women like Annie Barnes, campaigners for the female franchise left fascinating accounts of how they struggled and why. Picking up the resonance of the bitter conflicts of a century ago, we can also hear the voice of Mrs Humphry Ward, a passionate opponent of women’s suffrage.

I was unable to put down, amongst others, the memoir of Lady Constance Lytton, who created an alter ego, complete with physical disguise, so as to serve her sentence in Holloway Prison without deriving any benefit from her aristocratic status. Her intimate, immediate account of the conditions of the suffragette prisoners as they were force fed, tortured by being hosed with water, and degraded with filthy clothes and bedding, is a deeply shocking reminder of how much was endured for the cause.

To tie in with this display, we are delighted to be marking the service to that cause of a local woman, Kate Parry Frye, with a talk by her biographer Elizabeth Crawford . Elizabeth Crawford will be focusing on the biographies of this Kensington activist and of some of her fellow suffragists, and author Sonia Lambert will be reading excerpts from fictionalised accounts of women’s experiences that she has created based on extensive reading of the testament of suffragettes. The event will take place at  Kensington Central Library on Monday 26 February, 6pm – 7.45 pm. Book your free place via Eventbrite 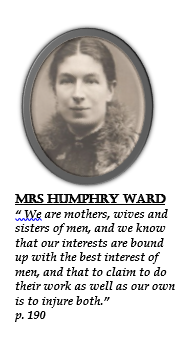 One of the challenges we face with our Biography Collection displays is that some of our most fascinating books are hiding behind some of our least alluring bindings! Although we’re all familiar with the adage “never judge a book by its cover”, we are always looking for ways to entice potential readers to overcome their resistance to borrowing these less than beautiful-looking volumes. This has proved particularly true this month, with some of our truly compulsive suffragette memoirs looking, frankly, a little unglamorous. Our solution is to enhance these with a wrapper showing a picture of the author, and a quote from the text which will hopefully whet your appetites.

Kensington Central Library and Waterstones Kensington will be hosting the fifth London History Festival this autumn.

Sir Max Hastings will be talking about his new history of the First World War. We are also pleased to welcome for the first time Lady Antonia Fraser on the Great Reform Bill, Artemis Cooper on Patrick Leigh Fermor and Charles Moore on Lady Margaret Thatcher.

There are also events on medieval warfare, the British soldier and in our fringe events Bohemian Soho, the Suffragette movement and the history of the Arab peoples. The Festival is bigger and better than ever.

John McHugo: A Concise History of the Arabs

Join John McHugo who will talk about his recently published work A Concise History of the Arabs which deals with the political, social and intellectual history of the Arabs from the Roman Empire right up to the present day. He will cover the mission of the Prophet Muhammad, the expansion of Islam, medieval and modern conflicts, the interaction with Western ideas, the struggle to escape foreign domination, the rise of Islamism, and the end of the era of dictators. The book reveals how the Arab world came to have its present form, why change was inevitable and what choices lie ahead following the Arab Spring. This will be followed by a Q and A session.

Sophie Parkin tells the story of the Colony Room which opened in Dean Street in 1948. For sixty years it became a meeting place for some of the most creative minds of modern times in music, theatre, art, literature, comedy and espionage. Sophie has collected tales of high jinks and low tragedy over 50 interviews with the members of one of London’s unique institutions.
Tickets for this event are £5 (£3 concessions) and are on sale at all Kensington and Chelsea libraries and via Librariesline on 020 7361 3010.

Lucinda Hawksley will be talking about her new book, March, Women, March, which traces the voices of the women’s movement in Britain, from Mary Wollstonecraft in the 18th century through to the “Flapper Election” of 1929, when all adult women were finally permitted to vote. As well as the famous names March, Women, March also recalls the many brilliant campaigners whose names have been forgotten over the years. Come and hear the witty, inspirational and shocking stories of how the vote was won.

Tickets for this event are £5 (£3 concessions) and are on sale at all Kensington and Chelsea libraries and via Librariesline on 020 7361 3010.