On Thursday 5th February 2015, North Kensington Library joined the thousands of Muggles, Witches, and Wizards that convened across the UK to celebrate the very first Harry Potter Book Night.

Unbelievably, it has been seventeen years since the first publication of “Harry Potter and the Philosopher’s Stone”. In that time, Harry Potter has evolved into a global phenomenon that has touched and inspired a generation. Harry Potter Book Night was a great opportunity for fans old and new to share their knowledge, learn new tid-bits, and celebrate this enchanting story. It was also a brilliant and exciting way to introduce prospective readers to the franchise. There were so many great moments, both in the planning stages and during the actual event. Here is a summary of some of the mischief managed!

I drew inspiration from some of the most iconic scenes in “Harry Potter and the Philosopher’s Stone” to form ideas on how to best transform the Children’s library into a little piece of the Wizarding world.

From “Chocolate Frogs” to “Bertie Bott’s Every Flavour Beans”, we had some of the best wizarding confectionary on display in our window. Although the actual chocolate frogs were nowhere to be seen, we did remember to display our collectible wizard cards.

The handmade wands we produced were pretty impressive; they came in different colours, a variety of cores (dragon heartstring, unicorn hair and phoenix feathers), different sizes, and were at least two Galleons cheaper. Ollivander, the famed wand-maker, had better watch out!

Zvezdana Popovic, our senior customer service assistant, created a charming version of the Mirror of Erised. In the book, the mirror is described as being able to show people their hearts’ deepest desires through their reflection. For Harry, who has never known his parents, this desire manifested in a vision of a loving family with living parents. Visitors to the library were encouraged to look into the mirror and share what they saw looking back at them.

Of course, no Philosopher’s Stone celebration would be complete without a Sorting Hat. I made our Sorting Hat from newspaper, mod rock and a copious amount of glue. It took two weeks to make all the props and although it did get a bit messy, it was not only great fun but also incredible to see the faces of the children who saw everything for the first time on the day.

If you knew anything about the architecture of Hogwarts, forget it. Ours was actually built during our January Story and Craft session. Led by Zvezdana, the attendees were invited to help design and construct their very own School of Witchcraft and Wizardry. The Billards, one of the families in attendance, helped to design and decorate one of the castle’s sides. I can hardly tell the difference between ours and the one used for the movies – it is just that great. Happily, the family also came along to the main event and posed for some lovely photographs in front of their hard work. 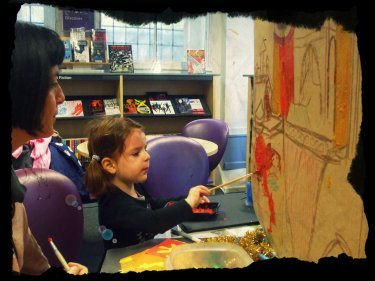 Zvezdana brought a chest full of wonderfully magical looking cloaks, robes and cloths that the children wasted no time in using to dress up in. Likewise, we staff members had a lot of fun dressing up for the event. Lynn Terrel (Kensington Central Library) looked the part in a very McGonagall-esque outfit that had many children exclaim excitedly upon her entrance. Silva Memic, Sophie Rose and Zvezdana all looked great in their velvety magical ensembles and I did my best impression of a Gryffindor student (although obviously, it was a bad decision as I quickly received a rather stern telling off from one young witch for failing to choose Ravenclaw as my house – maybe next year?). 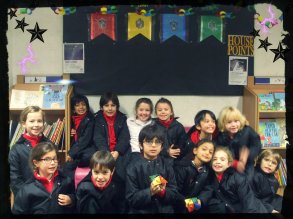 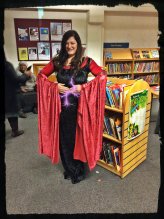 Without a doubt, the best dressed of the night had to be the young wizard who came as a young Harry Potter. He looked absolutely fantastic in his Gryffindor robes and took it like a champion even when he was subsequently sorted into Slytherin.

The Sorting Hat ceremony was loud, lots of fun and a great photo opportunity. The children were invited to sit on the chair and have the hat placed upon their head before blindly selecting a house from the sorting chest. Once sorted, they were given their house sticker which they wore with pride. The completion of the Sorting Hat ceremony led into the House Cup Quiz. The quiz turned out to be a really, really, passionate affair with Gryffindor as the ultimate winners. It was amazing to watch how quickly the questions were being answered and how eager each child was to earn points for their house. Next time, we will definitely need harder questions!

Mariam El Boukilli, who came to the event, shared her thoughts on the evening “I really liked the Sorting Hat and it was fun making the crafts. I liked playing Musical Statues (Stuperfy), the quiz was good – even if we didn’t win, and the prizes and sweets were really good. I had a lot of fun!”

We were incredibly lucky to host the talented Klaudija Cermak for a special presentation. A specialist in visual digital effects; some of Klaudija’s credits include work on two Harry Potter films, “Harry Potter and the Chamber of Secrets” and “Harry Potter and the Deathly Hallows Part I”. In the “Chamber of Secrets”, Moaning Myrtle, the ghost that haunts the girls’ bathroom, was her main responsibility. Klaudija revealed that she had initially been asked to work on the digital effects for the spiders but had to decline due to her arachnophobia. In the seventh film, Klaudija was responsible for the wand fighting scene between Harry, Ron and Hermione and the Death Eaters in the café. It was interesting to hear how the director would first share his vision, resulting in different processes and techniques she would then employ in order to create a product that everyone was satisfied with. The films “Troy” and “Gladiator” also appear on Klaudija’s long credit list and when briefly mentioned, Zvezdana was quick to point out that most of the audience were still restricted to U and PG certificates, much to everyone’s amusement.

It was a brilliant experience and I’m already planning for next year!

“He couldn’t know that at this very moment, people meeting up in secret all over the country were holding up their glasses and saying in hushed voices: ‘To Harry Potter – the boy who lived!”
– Harry Potter and the Philosopher’s Stone (A quote has never been truer!)