Our colleague, Hiru at Kensington Central Library has taken a good look at one of our eResources.

Access our eResource, Naxos Music Library online for free, with your Kensington and Chelsea library card.

You can check out online music streaming with Naxos Music Library and much more. Whether it’s orchestral, ballet, opera, vocal, world, rock, jazz and even your favourite film music, you can listen in peace at home, in a crowded tube, among friends or at work.

Naxos Music Library is the world´s largest online classical music library. Stream over two and half million tracks, with 600 titles being added each month.

Learn about your favourite music, listen to samples of works to learn about a composer or genre. Try the different playlists or create your own. If you are a music student, try out the resources page, where you find aural training exercises and work analysis of different composers.

You will be amazed on what you can find on the Naxos Music Library. Just by typing Swan Lake in the keyword search on the Categories tab, you would find 492 recording to listen to:

Introduce children to classical music and stories from ballet:

Delve into world music, music of different countries, including the English Country Garden:

Immerse yourself into opera.  There are 821 recordings of the Barber of Seville:

You can stream on your laptop, tablet or smart phone.  No need for an app, just click on this link to login with your library card: https://rbkc.naxosmusiclibrary.com/login/library/card

Our December display for the Biography Collection at Kensington Central Library is an unashamedly nostalgic celebration of some Christmas traditions, ancient and modern, from the cosily kitsch to the highly artistic.

The display falls into two halves. First there are the memoirs of Christmasses past. Published in 1955, Mary Clive’s Christmas with the Savages is a hilarious reminiscence of an Edwardian childhood Christmas staying with the Savage family of upper class eccentrics, like a kind of surreal, unruly version of Downton Abbey. Suzanne Lambert’s Christmas at the Ragdoll Orphanage is a heart-warming tear-jerker set in 1930s Newcastle; perfect for curling up by the fire with a mince pie. With chapter headings including “Near Collapse”, “An Awful Smell” and “Difficult Guests”, Hazel Wheeler’s Crackers at Christmas records a half-century of Yorkshire Christmases between the 40s and the 90s with a stoic misery that combines Eeyore and Scrooge, and paradoxically manages to be immensely cheering for those of us with mixed feelings about the festivities. From 1908, Queen Alexandra’s Christmas Gift Book was designed to look exactly like a personal photograph album belonging to the royal family, featuring intimate snaps and homely captions. 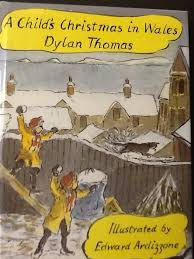 The second half of the display focuses on some of the people who created or invented rituals and experiences we cherish as part of Christmas. Their Christmas contributions may only have represented a small part of their achievements, but provide a good starting point for looking more closely at their lives. As you would expect, there are some Great Victorians – Henry Cole, who as well as founding the Victoria and Albert Museum, gave us the first commercially produced Christmas card; Isabella Beeton, who perfected the recipe for what we now know as Christmas pudding; Christina Rosetti, whose poem “In the Bleak Midwinter” has become one of our most popular carols – and of course, Dickens, the man who probably did more than any other to create the dream of a London Christmas in the mid-nineteenth century to which our imaginations have returned for generations, with his surprisingly scary and moving, life affirming A Christmas Carol. (Did you know he was involved in a court case about a plagiarised version of it? We include an account of this extraordinary footnote in literary history). No Prince Albert, I’m afraid, as it seems the idea that it was he who introduced the Christmas tree to Britain is erroneous – in fact we owe that to his wife’s grandmother, fellow German Queen Charlotte, and have included a fascinating biography of her.

Christmas in Hollywood has always been a sparkly affair, so you can find Frank Capra, director or It’s a Wonderful Life, Irving Berlin, composer of “White Christmas”, and a host of singers including Frank Sinatra, Judy Garland and Nat King Cole, who have provided the soundtrack for countless “Merry Little Christmasses”.

The story of Kensington’s own Peter Pan was the first great Christmas “show for all the family”, so J. M. Barrie is included – as is Tchaikovsky, whose Nutcracker ballet continues to enchant. Composers of some of the most magnificent Christmas music are also here – Handel (The Messiah), Bach (Christmas Oratorio), Britten (A Ceremony of Carols and St. Nicolas) and Vaughan Williams (Fantasia on Christmas Carols). All of these works are available through our website via the Naxos Music Library  (There’s free access to this for library members)

So turn down the brussels sprouts, retrieve the tinsel from the dog, turn off the TV for a while and enjoy a biographical glimpse at some of the people who have sprinkled a little sparkle over Christmasses we have loved.

With an unparalleled depth of classical music content, extensive background information, and improved search facilities that remain simple and effective, NML is a pleasure to use regardless of your prior music and/or technical knowledge.