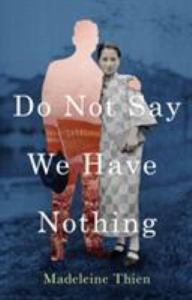 It is 1991 in Canada and a young girl and her mother who are originally from China welcome into their home a family friend who has just fled Tiananmen Square and martial brutality of the army. The young woman begins to relate a series of stories to the young girl and a bond is formed almost instantly between them. The book takes us back to before the Cultural Revolution where two sisters carve out their own lives and families who later come to diverge and interplay on one another. As the rule of Mao Zedong and his dominance deepens across China it has varying consequences for all they are and who they love.

This is a grandly epic novel and it feels as if its written by someone who has spent years on it – it deserves to have been shortlisted. Each character in the story is perfectly drawn and the way that it starts out as a series of stories begin to coalesce into the history of a family. One reviewer mentioned that they were ordinary but as 3 of the main characters are superlative musicians and composers I would disagree!

There are 2 criticisms that I would level at it. Firstly, the later scenes in Tiananmen Square are very rushed and it did not feel as authentically written or matter as much as the earlier histories which the family occupied. Secondly, at nearly 500 pages it was not a large book but it could have had 50 pages edited out of it.

Overall, it’s a very affecting piece of work and is a powerful reminder about how one person’s or governments blind control can turn us into different people in order to survive. But what will survival actually turn out to be and what remains for those who have been left behind?

Do Not Say We Have Nothing by Madeleine Thien