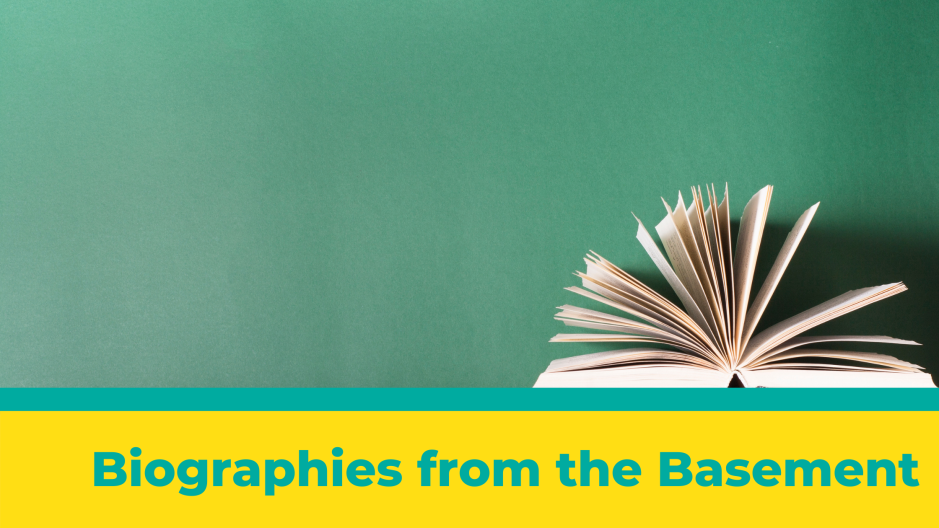 Every time I hear that someone I know has had their Covid 19 vaccination, I feel a sense of relief, and I was delighted to have my own first dose the other day.  Though the situation continues to be challenging for us all, and has brought so much sad loss, the vaccine gives us hope.

The history of humanity has been the history of a struggle against infectious disease.  Just a generation or two ago, diseases we now know only from history books and period dramas ravaged the population of this country and our lives have been transformed by our access to vaccinations against them.  Many of our older books in the Biography Collection still have notices pasted inside about what to do if the books have been exposed to infectious diseases. (Pic 1) (Until last year, these labels seemed like quaint relics of a distant reality – none of us imagined having to put books in quarantine again – but they show the prevalence of many serious contagious diseases not very long ago.)  Talk to someone in their 70s or 80s, and the chances are they will recall the death of someone they knew from these once all too common infections. My mother recalls with horror the death of her three year old cousin from diptheria at a time when it killed an average of 3,500 children a year in England and Wales, and my mother-in-law lost her father far too young due to TB (tuberculosis); a generation earlier, two of my grandmother’s siblings died in young adulthood from the same disease.  No family was untouched by the tragedies wrought by these lethal infections.

In the Special Collection of Biographies, we can find the stories of many of the people who developed vaccines, thereby saving millions of lives.  It would take too long to look at the inventors of all the most important vaccines, but here is a whistle-stop tour of just a few of them:

Edward Jenner was the father of vaccination; in the 1790s he investigated the fact that milkmaids had a far lower rate of smallpox infection than average, and worked out that the cow pox they were catching from cattle was making them immune to the much deadlier smallpox (killer of 10% of the population at the time).  He had the revolutionary idea of introducing just the right amount of disease to produce immunity in healthy people.  Amongst many books about him, we have the earliest biography, published by his friend John Baron in 1838 (Pics 2 and 3)

Over a century later, Louis Tompkins Wright revisited smallpox vaccination in a military setting and invented the procedure of interdermal vaccination.(Pic 4) He was inspired by his doctor father, Ceah Ketchan Wright, whose achievements would have been impressive in any context, but were particularly remarkable given that he was born into slavery in Georgia. Wright followed his father into the profession, graduating from Harvard in 1915.  Serving as an Army Medical Corps Lieutenant in France during the Great War, he perfected the method whereby vaccine is injected into the skin rather than more deeply, which enabled him to vaccinate soldiers quickly and with reduced risk of infection. He was awarded the Purple Heart for his war service, and was subject to poison gas attack which affected his health for the rest of his life, and caused his death aged 61. He became a civil rights activist and was president of the NAACP (National Association for the Advancement of Colored People) from 1935 until his death in 1952.  As the first African American to serve both as surgeon on the staff of a desegregated hospital (Harlem Hospital, where he eventually became Chief Surgeon) and as a police surgeon, Wright fought racism throughout his career, and protested against segregated medical care.  As his father had inspired him, so he inspired his two daughters, who both went on to become ground-breaking doctors and cancer researchers.

Polio was a huge problem in the twentieth century; panic would erupt, and public swimming pools be closed, when the disease went through a community.  It could be fatal, and could lead to permanent paralysis, sometimes meaning that the only way the sufferer could survive would be to live inside an “iron lung”, which enabled them to breathe but made any kind of normal life impossible.  Jonas Salk, the son of uneducated Russian Jewish immigrants to the USA, developed the vaccination in 1955. (Pic 5) He had previously developed a vaccine for flu, which the pandemic of 1918 had shown was a viral infection rather than a bacterial one, as had been believed.  He struggled with the huge fame and adulation he experienced after making his life-saving discoveries.

Many of us will remember having the BCG vaccination against TB as school children – but may not know that the “BCG” stands for Bacillus Calmette Guerin, after Albert Calmette and Camille Guerin, the  French immunologists who created the vaccine in 1921 – of whom unfortunately only French language biographies have as yet been published. (Pic 6) Robert Koch had won the Nobel Prize in 1905 for his work identifying the TB bacillus, which made a vaccine possible – it is extraordinary to realise that at one time, 1 in 7 of all deaths throughout the whole of global humanity was caused by this disease. (Pic 7)

At the Michigan Department of Health, Pearl Kendrick and Grace Elderling (pic 8) developed the vaccination for whooping cough (pertussis). It caused violent paroxysms of coughing, with the characteristic sound that gave it its name, which could be fatal, especially in children who were 95% of its victims.  Both women had survived the disease as children and were keenly aware of how easily they might not have done. As the Great Depression had led to the department being starved of funds and staff, the women undertook their research unpaid and outside their normal working hours.

Maurice Hilleman grew up on a farm in Montana, and later said that the deaths of his mother and twin sister shortly after his birth made him want to save lives, and that working with the chickens as a boy had led to his interest in biology. (pic 9) He went on to develop an incredible 40 different vaccines, including those for measles, mumps, and hepatitis A and B.  It is estimated that his work saves 8 million lives worldwide every single year.

I hope you have enjoyed reading about these people whose discoveries have saved so many lives, and may be inspired to read their stories.  Check out our BioEpic podcast available on Anchor, Spotify, Apple Podcasts, Breaker, Pocket Casts and Radio Public for more stories of fascinating people.