Alongside Learning Nexus, the Royal Borough of Kensington and Chelsea has recently invested in a fantastic new online resource for library users interested in the pursuit of lifelong learning!

Universal Class is a real treasure trove of online learning, with over 500 free courses to choose from, in almost any subject area you can think of. All you need to do is join the library (if you are not already a member) and sign-up online.

Subjects range from ‘Office Skills’ and ‘Psychology’ to ‘Performing Arts’ and ‘Finance.’ Each course comes with dedicated instructors, module based lessons, assignments and tests. You can sign-up and look for the course you are interested in anywhere, anytime: among the many benefits of Universal Class is the ability to learn at your own pace, and in your own time. This flexible approach is especially useful for those of us juggling multiple priorities in our day to day lives!

Of particular interest to existing customers of Kensington Central’s Business Information Point will be the online business courses, which are available to anyone wanting to study business, start a small business or need help with their existing business.

So – whether your interest lies in Mindfulness, Web Development or Creative Writing – visit our Universal Class information page and take the plunge! The service is completely free for library users. A whole world of knowledge awaits you…

If you want to find out more before getting started we will be holding introductory ‘Online Learning’ sessions during Adult Learners’ Week in June. 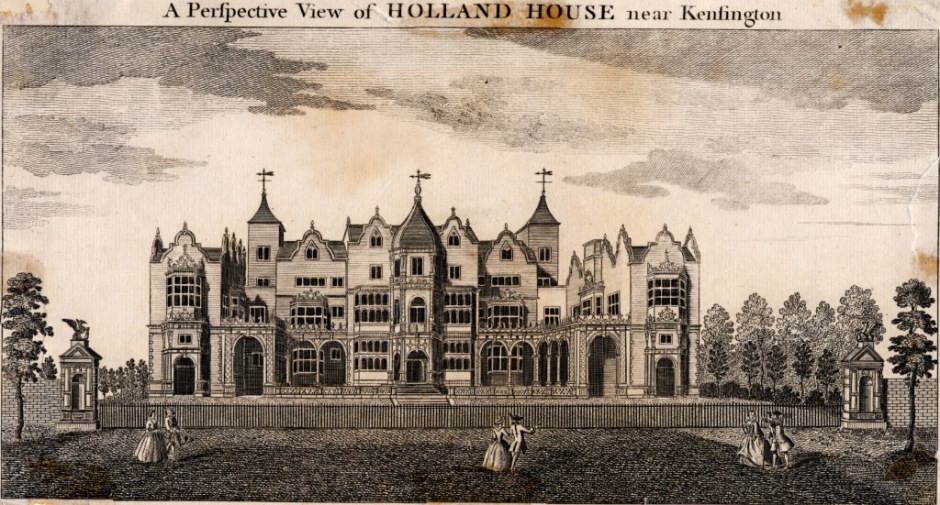 As the final part of the redecoration of the Reference section at Kensington Central Library a quartet of large prints of images from the Local Studies collection have been put up in the IT section of Reference (East Wing). They were chosen by staff from Reference and Local Studies to represent the historical heritage of the area around Kensington High Street, the former Kensington Turnpike around which the old Borough of Kensington grew.

On either side of the window are the two great houses of Kensington. Kensington Palace was built in 1610 but has been much altered since William and Mary adopted it as their winter palace in 1689. This engraving from 1730 shows it as the home of George II, the last reigning monarch to live there. (His grandson George III moved to Buckingham Palace).

On the other side of the window is Holland House.

Holland House, once the centre of an estate of two hundred acres, was built for Sir Walter Cope but took its name from the first Earl of Holland who married Cope’s daughter. At the time of this picture (about 1769) it was the home of the politician Henry Fox, Baron Holland. It suffered considerable damage during the Second World War but parts of it have now been incorporated into buildings in the modern Holland park.

On the right hand wall is a view of St Mary Abbots Church.

This is not of course the St Mary Abbots we know today with its high spire. That was built in 1869 to replace the building shown here.

This St Mary Abbots was built in 1772, replacing a building of 1683 which was itself a rebuilt medieval church. Kensington has been a parish since the 13th century.

The final image is a tower which you can still see today.

The Queen’s Tower was once part of the Imperial Institute, one of the buildings which formed part of Albertopolis, the complex of museums and educational institutions which was the brainchild of Prince Albert. It was his son, the future Edward VII, who pushed for the creation of the Imperial Institute. It was completed in 1893. For a view of the interior see my blog post at :

Despite its ambitious intentions the Institute struggled to find a role for itself and was demolished in 1965. The Queen’s Tower remains though as a reminder of the splendour of the Imperial Institute.

When you’re sitting in the new IT area we hope you enjoy these views of Kensington before the age of information.

Do you consider yourself a bit of a history buff? Do you want to learn more about our ancestors or how people lived in the past? Perhaps you are an amateur archaeologist, a student of history or just enjoy delving into the past? Then why not pay a visit to Kensington Reference Library and pick up one of our exciting history or archaeology magazines!

We stock the following magazines and also keep back issues:

BBC History is a monthly publication devoted to British and world history. This exciting publication brings history to life and is the UK’s biggest selling history magazine! Each month you will find topical features, historical analysis, and podcasts featuring interviews with leading academics and historians. The magazine also has regular book reviews, exhibition news and history events taking place around the UK. There is also a monthly crossword for all you history buffs!

History Today is a monthly magazine that covers all periods of British history and the rest of the world. It features serious and interesting articles from academics and historians covering lots of new research, reviews and narrative history.

April’s issue features articles on Ukraine, Church and State, Garibaldi in London and Compensating the Railway.

Current Archaeology is the UK’s biggest selling archaeology magazine.  It is published monthly and features regular articles on excavation, reviews and the latest archaeology news.

In the May edition read all about the Anglo –Saxon Staffordshire Hoard, and the Neolithic Revolution in Britain and Ireland. Plus there is also an exciting review about the new Vikings life and legend exhibition at the British museum.

These magazines and more are all available at the Central Reference Library– come in for a browse and you may find yourself on a journey into the past!