Gardening involves fresh air, exercise and being outside, close to nature and in the elements.  Being in the garden can have great health benefits so we have collected a range of articles and videos to inspire you.  Have a look at the resources below to find out the proven benefits that gardening can have on your health and wellbeing.

END_OF_DOCUMENT_TOKEN_TO_BE_REPLACED

On a drizzly, wet afternoon after school last week Brompton Library was pleased to welcome our friend Matthew from the Ecology Centre who brightened everyone’s day with the promise of growth and renewal by the planting of a pea!

Matthew was inundated with keen kids and their carers who were shown how to make an environmentally friendly plant pot with newspaper and a wooden press. They then added some compost and the seed and Hey Presto! – they had a seed to nurture at home.

In this part of the borough most of the housing is in flats, whether they’re in mansion blocks with their own garden squares or social housing with a local park, so many kids won’t be used to getting their hands stuck in to garden soil or watching their own plant grow from a seed to an edible vegetable.

Let’s hope that at least some survive (though I have my doubts!)

Many thanks to the Ecology Centre – the plant potters event is new to libraries this academic year and I hope it’s as well received at other libraries as it was here. See our latest events listing or ask in your nearest RBKC library for the next Plant Potters event. 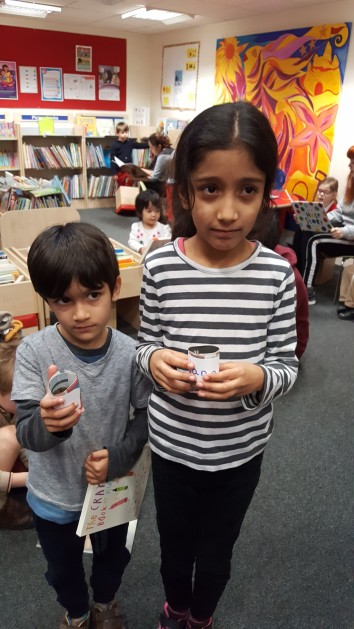 As the Chelsea Flower show has just passed by for another year, this seems to be an opportune time to highlight a garden publication that has been around for exactly one hundred years. It was way back in 1914 that  William Jackson Bean wrote and published  his first two-volume edition of the reference work Trees and Shrubs Hardy in the British Isles  which was immediately recognized as a masterpiece of authoritative writing and which has remained  a standard reference work ever since.

William Jackson Bean was born in Yorkshire in1863 and started work as a student gardener at the Royal Botanical Gardens in Kew. He continued working there for 45 years, becoming curator from 1922 to 1929.  He became a leading expert on woody plants in cultivation and published several other articles and books as well as this major work which was the first book to arrange trees and shrubs in alphabetical order as opposed to botanical classification as all its predecessors had done.

In addition, he wrote in a presentation style that satisfied both amateur gardeners and professional botanists alike.  A third volume was published in 1933 and five further editions were published in Bean’s lifetime.

After his death in 1947, further editions appeared and although the eighth and last edition is no longer in print, copies of it can still be viewed at Chelsea and Kensington Reference libraries. You are welcome to come in and browse- please ask a member of staff for help.