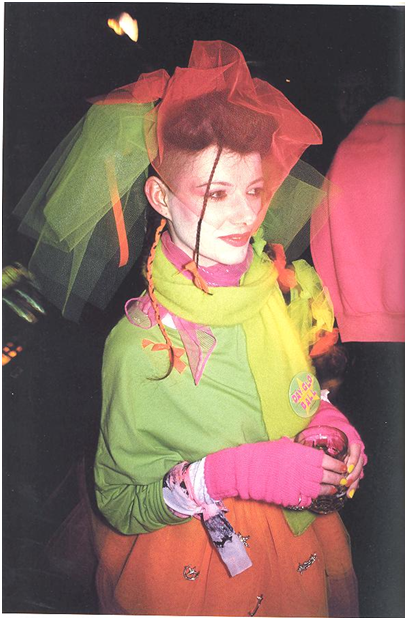 I was a teenager in the 1980s and I was interested to see if I recognised any of the clothes on display. I was really surprised at how much I recognised – I mean I obviously didn’t buy or wear any designer clothes (my Saturday job at C & A’s didn’t pay that well!) but I was an avid reader of Just Seventeen (a weekly magazine that began in 1983) so I was aware of designers such as Katherine Hamnett and Wendy Dagworthy. Just Seventeen also featured items from a shop called ‘Boy’ on the Kings Road – this is now called ‘Ad Hoc’ and little did I know all the years ago that I would end up working less than five minutes away from there…

One fantastic thing about the exhibition is the 1980s soundtrack they play and hearing some of these songs and these really brought back memories for me – so much so I wanted to share them on this piece.

If you’ve been inspired to listen to some music from this great decade – check out our CD collections in our libraries.

Gillian Nunns, our Reference Librarian with the Chelsea Library fashion collection at her fingertips, writes:

I recognised some of the songs in the exhibition but can’t remember them from the time!  To make up for it I have been looking through the books and magazines in Chelsea Library’s fashion collection and getting an idea of the 80s vibe.

It was great to see images from London’s 80s clubs such as Blitz, The Wag Club and Taboo in our collection.  The clothes take inspiration from a great mixing-pot of places and times.   Here is a picture of a Blitz Kid – Steve Strange from Visage, who features in Jodie’s Playlist:

And here is someone at Heaven’s Day Glo Ball in 1984 that we found in When We Were Young by Val Williams, which is a great book of street portraits taken in London by Derek Ridgers between 1970 and 1987.

In the early 80s there was a shift away from Punk’s anti-fashion stance with subcultures like the New Romantics, who dressed really theatrically and individually, taking inspiration from artists like Bowie.  Here is a picture of one of David Bowie’s outfits from his Serious Moonlight tour in 1983:

So with the new club culture growing London seems like an exciting place to have been in the early 80s, with different kinds of music and styles emerging.   Here is a nice shot of Sade by the Thames who also feature in Jodie’s playlist:

London’s club scene in the 80s was documented in independent magazines from the time such as i-D and Blitz.  These great i-D magazine cover’s are also in the book ‘We Can Be Heroes’:

From the V&A exhibition Jodie and I got a sense of how designers took inspiration from street style, and I came across some great images of some 1980s collections.   London’s theatrical and eclectic club scene can definitely be seen in Wendy Dagworthy’s designs.  Check out this design with its layers and mix of cultural influences that I found in a book called The London Look:

Punk’s legacy can be seen in Katherine Hamnett’s anti-establishment slogan t-shirts.  Hamnett herself wore one saying ‘58% DON’T WANT PERISHING’ to meet Margaret Thatcher at Downing Street. Here is an image of one that we found in Harpers & Queen, October 1986:

And there was also Body Map,  which started with a stall in Camden market and was closely linked with London’s thriving club culture, even holding its own Body Map parties.  By 1982 there was lots of hype around this brand, which also exploited a younger market by making a more affordable, b-Basic clothing range.  This Body Map outfit is from Harpers & Queen, October 1986:

And I haven’t forgotten Vivienne Westwood, whose 1981 Pirates collection saw her move away from the Punk scene but stick with taking inspiration from rebellion.  Like with London’s club fashions, her 80s collections including ‘Pirate’, ‘Savage’, and ‘Witches’ took inspiration from a melting pot of places and times.  Her 1982 collection ‘Savage’ collection has a tribal look:

Vivienne Westwood’s Worlds End shop is just down the road from us on the King’s Road, which got us thinking about what else was happening on The Kings Road at the time.  Of course the Kings Road in the 60s is pretty infamous, but after the 60s the draw continued…

If you enjoyed this, keep an eye out for more 80s fashion posts!