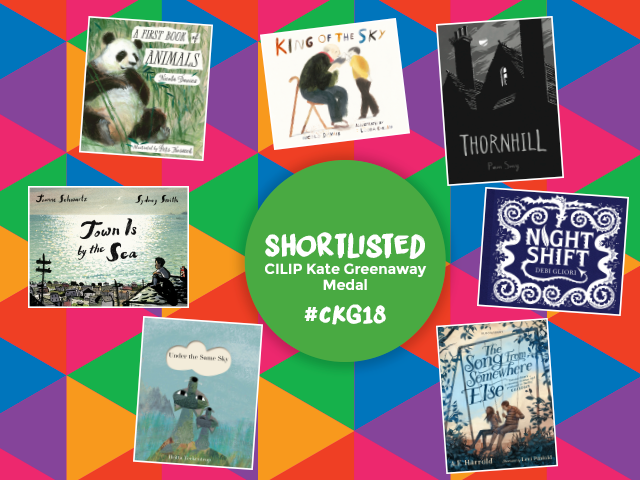 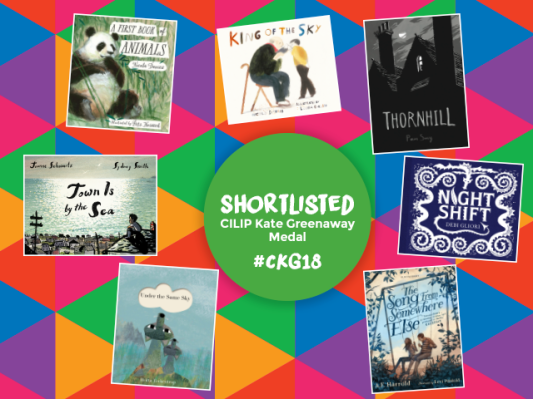 The CILIP Kate Greenaway Medal shortlist was announced last month. It’s an interesting collection of books, some for older children and some for younger, with one non-fiction entry.  What they all have in common is that they are all beautifully illustrated, and the illustrations really add to the power of the story-telling and the information giving.

The winner will be announced on Monday 18 June, (along with the winner of the CILIP Carnegie Medal 2018) and here’s our thoughts about the chosen books –

Town is by the Sea

The story of a boy as he goes about his day in the seaside town that he lives in.  During his day, thinks about his father, below the sea, mining for coal.  We see the underground and the over-ground life of the town.  The story is beautifully brought to life by the illustrations and it’s easy to imagine that you are with him as he goes about his day. I found the book really engaging and the illustrations very much brought it to life.

Under the Same Sky

A picture book showing different animals all living together under the same sky, and in the same ways as us.  Very simple and moving.

King of the Sky

A boy makes friends with an elderly neighbour who keeps and races pigeons.  The man shows the boy how to handle the pigeons and gives him one of his own.  He calls him “Re del Cielo”, King of the Sky.  But can the pigeon with the milk-white head win a race?

A First Book of Animals

The only non-fiction book on the shortlist, this large book with full page illustrations, takes the reader through the wonderful world of animals.  Including specific breeds, as well as insects and even coral with some information about eggs, how animals find water and animal home.  The illustrations are bright and colourful and the text is written in an entertaining way while packing in many facts!  I think this book has been created really well with young children in mind and they would find it very engaging. A keepsake book that can be looked at again and again.

This book was very intriguing.  A combination of diary entries and illustrations, the book tells the story of two girls living in the same place but 30 years apart.  One girl is living in an orphanage and being bullied and the other lives in a house opposite and often finds herself home along while her dad is it work.  She can’t resist exploring the old orphanage and the two girls become linked, even though they never knew each other.  It’s a dark tale and the format and the black and white illustrations suit the story.  Creepy in parts and sometimes very sad. I wanted to keep reading and I wanted to know what happened.  I liked the unusual format but I thought the story would have been richer if the written parts were not only diary entries, or if there could have been pictures and writing for both characters.

This book is very powerful and very simple.  Drawing on her own experiences, the author uses a dragon to show what it is like to fight depression.  The book takes you into the heart of the pain and loneliness of the illness and brings you out of the other side.  A very helpful book to give young sufferers hope and to let them know that they are not alone.

The Song from Somewhere Else

This book deals with similar themes to Thornhill – bullying, isolation and also includes black and white illustrations.  What I liked about this book is that it shows that things pass, that we can find friendship in unusual places and that people and situations are not always what they seem.  This is an engaging book with magical elements, brought to life by the illustrations. 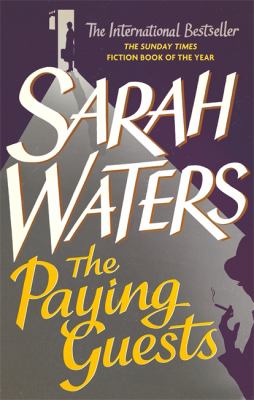 Have you seen our Book Awards page?

We’ve gathered all the contenders and winners of the UK’s most popular literary awards in one place! So if you’re keen to read a whole shortlist, want to know what all the fuss is about a particular winner, or are just looking for a great book to read – take a look. All our book lists link straight in to the library catalogue, so you can find out which libraries hold copies of the book you’re after and whether they’re available (you can reserve from here too).

The book awards we feature include the Man Booker, Waterstones Children’s Book Prize, the Specsavers National Book Award and many more!

Why not try The Miniaturist by Jessie Burton (above) – winner of the 2014 Waterstones Book of the Year, winner of Book of the Year and Best New Writer in the 2014 Specsavers National Book Awards. This is a wonderful read set in 1686 Amsterdam. It follows eighteen-year-old Nella Oortman as she arrives from a small village to the Amsterdam household of merchant trader Johannes Brand, her new husband. A gripping story unfolds as she is given a cabinet by her husband containing an exact replica of their house.

Take a look too through the excellent shortlist for the Bailey’s Women’s Prize for Fiction, including the latest book by Sarah Waters: The Paying Guests. The winner will be announced in just a couple of weeks!

Each time a new shortlist is announced, the lists are refreshed – but we are gradually building a ’round up’ list of past prizewinners, so you can always be sure to find some great quality reading.

Notable winners in the past include the famous Terry Pratchett, Philip Pullman, CS Lewis and Raymond Briggs, Shirley Hughes and Quentin Blake for their much-loved illustrations.

Check out this year’s nominations at The Cilip Carnegie & Kate Greenaway Chilren’s Book Awards website. There are a couple that catch our eye: The Reluctant Assassin by Eoin Colfer and A Dream of Lights by Kerry Drewery…

In the Reluctant Assassin, a Victorian orphan named Riley is apprenticed to illusionist and crook Albert Garrick. One of Garrick’s would-be victims is a scientist from the future and after a failed assasination attempt on the scientist’s life,  Riley is transported through a wormhole to 21st century London with Garrick hot on his heels. Riley meets Chevron Savano, a seventeen-year-old FBI agent and together they must defeat Garrick who is determined to track them down and return to Victorian London to wreak havoc with his 21st century knowledge…

In A Dream of Lights, Yoora is a teenage girl  struggling to survive in a rural village in North Korea. To escape the daily misery of her life, she dreams of the lights of foreign cities. But her world falls apart when she falls in love with the wrong person and her community turns against her. Her father is killed, and she is taken to a mountain prison camp. Will she ever escape? But Yoora is about to learn an important lesson: love can surprise you, and it can come in many forms…a powerful and moving novel.