27th January is Holocaust Memorial Day, on which we remember the victims of the Nazi Holocaust and of the genocides in Cambodia, Rwanda, Bosnia and Darfur. The theme this year is “Be a Light in the Darkness”, with a focus on those people who risked their lives to resist evil. We have many books in our Special Collection of Biographies about rescuers, who took unimaginable risks on behalf of their fellow human beings, knowing that discovery meant death (you can see a selection of them in this picture).

One of our books about a rescuer has a special significance. It was donated by our very own Library Customer Service Officer at Kensington Central Library, Besart Zhubi, and is My Life Under the Nazi Occupation by Mimi Kahmi Ergas-Faraxhi (Shkup, 2018). I spoke to Besart about the book, and what it means to him:

CJ:  Can you tell us a bit about the background to this book?

BZ: I never knew my maternal grandmother well – she died before we had time. We escaped Sarajevo in 1992 when I was 6. A genocide was being planned to eradicate all those of Islamic heritage. A civil war was raging. The government considered us stateless. We arrived in London and the UK gave me a new home.

Nenedaja (Grandmother or literally the mother of my ‘maternal uncle’) died in 2001. But my mother kept her memory alive, often telling me stories of Mimi. Mimi was the woman Nenedaja would say was her Jewish friend in Albania. “Mimi had the most amazing voice. Mimi would sing so beautifully”.

Fast forward a few years and Facebook was ubiquitous. I set out on a mission to find Mimi. Mimi had died, but I found her daughter Drita (Ita) Bartova. Drita means light in Albanian. It amazed me to discover my mother’s history and mine too. Drita told us about this book! The North Macedonian Cultural department sponsored it as a recognition of the role Albanians played in protecting Jews.

CJ.  Can you describe the situation in Macedonia during the Nazi period and how it affected Jewish people?

BZ. Much of the Balkans had come out of imperial domination from the Ottoman empire. The interior was underdeveloped, and this was especially true of North Macedonia. By 1941 the Axis powers invaded. Collaborationists filled train loads of Jews for transportation to death. The only refuge was Albania, conquered and ruled by Italians. Italy – while thoroughly Fascistic – was less concerned with Jews earlier on in this period, though later this changed, and the Albanian government had a certain amount of lee-way to protect Jews.

The Ergas-Faraxhi family recognised that if they stayed in North Macedonia, they would die at the hands of Nazis and their collaborators. It’s also important to note that a resistance developed in Bulgaria later on, and in Serbia. However, Albania was the only country in mainland Europe to experience a rise in the population of Jews during the period of the war, due to the number who sought sanctuary there and were helped. 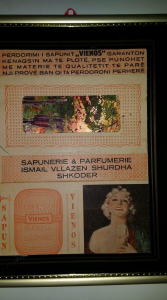 CJ. What can you tell us about your grandmother and her family?

BZ. My Grandmother, or Nenedaja, was a young girl from a wealthy family of many years standing, with an incredible history of trading with their own ship. She was a pioneer. In her community most women were illiterate. Her father forced her to go to school and join the anti-Fascistic league. She was to learn to read and write–and my mum tells me that Nenedaja was so ashamed of this! She cried for being forced to go to school. Traditional culture viewed women’s education as unimportant. But Nenedaja persevered. She became committed to the Partisan cause. She learned to read, write and use a typewriter. It sounds utterly trivial now, but there wasn’t a single woman in her home city of Ulqin that could read, write and type. She read widely, but mostly communist propaganda. She taught other women to read too. 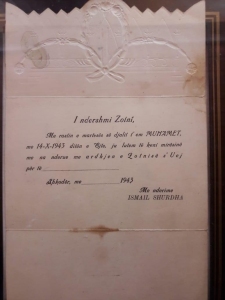 CJ. How did your grandmother get to know the Ergas-Faraxhi family?

BZ. Under Ottoman rule, Jews could work in whatever business they wished, whereas they were traditionally forbidden to join guilds in Christian Europe, where many were desperately poor and were subject to regular pogroms and murder. This rampant and poisonous level of antisemitism was relatively absent in the Ottoman empire and so Jews were integral to life in Albanian cities. (Before WW2, King Zog – absolute monarch of Albania – was eager to encourage Jewish specialists to move to Albania to help develop Albania. King Zog would never return as Albanian Communists took power.)

Now, my grandmother spent much of her youth in her family’s compound in Shkodra, Albania. Mimi Ergas-Faraxhi, her husband and her daughter (Drita) moved in next door. My grandmother, naturally curious about the new family, visited and became friends with Mimi who posed as Albanian – but they were refugees from Macedonia and when they revealed they were Jewish my Great Grandfather promised them complete sanctuary and safety. Mimi and my grandmother became good friends and my Nenedaja and her cousins would try their best to cheer her spirits as news came of what was happening to Jews and to her family–in Macedonia. Mimi described being invited to a wedding at the ‘Shurdha’ household (my grandmother’s maiden name). Mimi described it as a lavish occasion with each table having its server. Mimi would have baby Drita over to my grandmother while Mimi took a rest. It was a close friendship formed in trying times.

CJ. Your grandmother’s family helped Mimi, her husband and baby daughter Drita to hide. Do you have any thoughts about what might have informed their courageous behaviour?

BZ. The Canon of Leke Dukagjini codifies Albanian custom in an ancient manuscript dictating how Albanians should behave. We treat guests with the utmost esteem. In Albanian custom, we treat a guest as a young king. The householder would rather die than hand over a guest to his enemy. 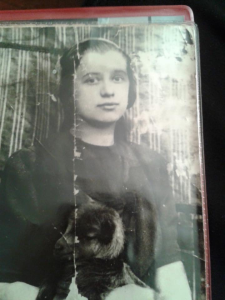 CJ. What kind of practical help did your grandmother’s family offer the Ergas-Faraxhis?

BZ. Italian and later German soldiers raided and interrogated the wealthier families; soldiers extorted the local population through raids to find weapons and hidden Jews. These raids were the norm – to seek Jews and the resistance. My grandmother’s father often paid off soldiers. In terms of physical help it was mainly financial. Milk, flour, food, and babysitting. Baby Drita was looked after by my grandmother and when raids happened they didn’t betray a single person, though if their complicity had been discovered they would also have been killed. 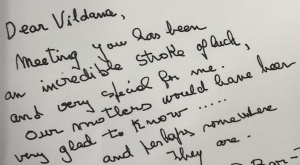 CJ. Did you grow up being aware of the story of what your forebears had done during the Nazi occupation?

BZ. No. I had no idea what my grandmother did during WW2. I became aware from relatives in Albania that she was in fact a spy for the Communists, giving the location of Italian, and then German troops who were being terrorised by Albanian partisans. Italy was invaded by the allies and Mussolini’s regime collapsed. Marshal Tito gave Nenedaja a medal in recognition of her efforts.

CJ.  It is fantastic that your research led to you and your mother actually meeting Drita, who was a baby when your grandmother helped make sure her family survived – can you describe what you felt? Can you tell us about the meeting with her in Israel, and about the inscription she wrote in the book?

BZ. It was incredible. I felt such a deep connection to my grandmother by meeting Drita. Drita kindly sent us the wonderful and heartbreaking tale written by her mother. She inscribed her mother’s memoir of her experiences, including being helped by our family, saying “Meeting you has been an incredible stroke of luck, and very special for me. Our mothers would have been glad to know….and perhaps somewhere they are.”

BZ. Well, it’s a story unique to its time and place. But, ultimately it’s a universal story because it’s about friendship, survival and the capacity for human kindness and barbarity. It’s a story that Jews, Muslims, and Christians can live happily side by side together. It’s a story of courage in the face of barbaric crimes, and of survival. It’s interesting for me, but there are countless other tales of bravery. History has erased Albanians. It’s a source of great disappointment. I fear that history repeats: first as tragedy, then as farce.