Today is the 70th anniversary of the Normandy Landings, and activities commemorating the events of early June 1944 are taking place in France, England and around the world. 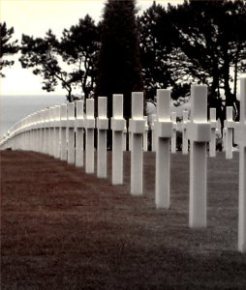 Reading Anne Frank’s diary I realised that it was not just the British who were awaiting the invasion of occupied Europe but also those living under the tyranny of the Nazi regime and occupation. There were feelings that the Allies’ invasion was long overdue, especially considering the fall of Mussolini’s Italy in July 1943. At the same time, the Russians were annoyed at what they saw as too much being put on their shoulders.

The invasion was planned for earlier but bad weather had postponed it until Tuesday 6 June. The landings began overnight with gliders and parachutists landing in Northern France; leaflets were dropped warning the French people of what was to come.

Unsurprisingly when the news came forth the newspapers sprang…