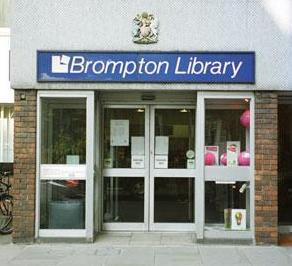 The Easter holidays have ended and so (it seems) has the bitterly cold weather which refused to succumb to the golden rays of spring and appears to have finally relinquished its icy grasp of the country- hooray!

Over these last few weeks Brompton Library has been busy with students, computer users and book borrowers as well as groups from local schools, families and children who have been taking home a selection of newly received picture books, educational material and junior/teen fiction which we have added to our shelves.

In addition to this we also have new stock of non-fiction including celebrity-chef cookery books and travel guides, contemporary-fiction and classic anthologies from authors such as H.P Lovecraft and Edgar Allen Poe, newly released albums by Black Rebel Motorcycle Club and Johnny Marr and DVDs including The Hobbit and Seven Psychopaths -the new film from In Bruges director Martin McDonagh and star Colin Farrell.

During the Easter holiday period we also continued to run story and craft activities for young children overseen by our wonderful staff members, Elisabeth and Katie and with help from our lovely weekly volunteer, Lisa.

The first session was on Sat 6 April 2013 – we read a Charlie and Lola story: ‘We completely must go to London’ by Lauren Child. We looked at the map at the back of the book showing the famous places they had seen & how they got there.

At the second session we  focused on football so we read ‘Willy the Wizard’ by Anthony Browne and ‘Football Fever’ by Alan Durant. We made football pictures by sticking on a goal, a goalkeeper & other players. We also had a picture of a footballer to colour.

There was another session on Sat 13 April; this time the theme was transport, so our stories were about buses and trains.

Well, where were you all on Saturday 16 March? Well we had what must rank as one of the unlikeliest events to be held in a library (with the possible exception of pole dancing!).  Now you will never know the joy of watching someone skin and stuff a dead rat!

Seriously, this was a fascinating demonstration of the craft of taxidermy. The delicacy and skill needed to detach the skin from the membrane containing the innards was surprising and it’s not at all grisly or smelly.

The photos are more during and after than before and after. In the first you can see the skin taking shape with cotton wool inside.

In the second you have the sweetest rat ever!

For more information see Amanda’s website for some truly esoteric taxidermy. According to Amanda, taxidermy is the new knitting!

As part of the Cityread London 2013 our reading group was asked to read ‘A Week in December’, Sebastian Faulk’s multi-character novel looking into the lives of people across London. Memorable characters include a tube train driver, a suicide bomber, a book reviewer and a financier.

I had quite a reaction to the book. Some people could not get past page 70. There were several characters which I thought were very unconvincing. However what made me re-evaluate my poor impression of the book was some marvellous viewpoint from one of my members, that Faulks deliberately made the characters more larger-than-life, because he wanted his book to have more of an impact on the reader, especially with regards to the financial gloom and doom.

Faulks goes into detail with how this financier managed and played with people’s money and it really brings home to you how vile and destructive these people were, and also how we as a populace were so ignorantly blissful to it. It was great to read Faulks’ own assessment about this in the Evening Standard this week.

Overall, I do not believe that it is Faulks’ finest piece of work and it did not have the pathos of his other books, but then again this book was not about that – it is a statement also about how we live in this cruel and brilliant London and the deep-rooted connections that binds us all.

Speaking of which, as an alternative choice to this year’s Cityread, I offered my reading group ‘The Lonely Londoners’ by Sam Selvon. Set in 1950s London, it follows the fortunes of folk who have come to the UK from the West Indies to make a new life. This, I have to say, drew fulsome praise from my reading group. They thought it was sad, funny, and poignant and the language and different words adopted for different parts of London made it a fascinating read. For two members it struck them with shame that we treated these newcomers in this way. Their harsh and lonely way of life is transcended by the beautiful and gentle prose of Selvon; this book is highly recommended by our reading group!

And finally, we recently had a visit from the BBC film crew for The One Show in which they filmed me ‘shushing’ an actor making a disturbance in the library. My performance was certainly Oscar worthy!